Even before his death in 1957 much was written about Jack Yeats. Writings about Yeats paint a picture of a man who was an independent and a free thinker. Jack once described himself as a traveler without a ticket. For most of his childhood his grandparents raised him, separated from his siblings. As an artist, he did not take any students; he did not allow anyone to watch him work and he remained on the periphery of the artistic and literary circles that he was included in. Described below are some of the works held at Falvey Library by well-known Yeats' scholars and critics.

Marriott's book was one of the first written about Jack B. Yeats’ life and career as an artist. In his book His Pictorial and Dramatic Art, Marriott discuses Yeats’ early influences, in particular his father and his childhood in Sligo. It was first read at a meeting of the Manchester Literary Club in 1911. The book contains an illustration of Jack as a child by his father, the artist John Butler Yeats. Also included is a foldout map of Pirate Island inspired by his toy ship exploits on the Gara River in Devon.

MacGreevy, a poet and critic was a long-time acquaintance of Yeats and later, a pallbearer at his funeral. This book was first written around 1938 but it was not published for another seven years. Victor Waddington, friend and dealer of Yeats’ art, eventually published the work. In the author’s introduction Thomas MacGreevy states nearly a dozen London publishers rejected his essay. Yeats’ art was not well appreciated in London and MacGreevy suggests his critique of the artist “seemed un-English in England” (MacGreevy 4).

McGreevy describes Yeats as a national painter not just because he painted the everyday people of the countryside but because of the artist’s choice of subject matter in the time at which he was painting. Ireland’s struggle for independence and identity was ongoing for the first half of Yeats career. According to MacGreevy, his work became the “consummate expression of the spirit of his own nation” encouraging pride and a sense of Irishness (MacGreevy 4).

A literary critic for the Irish Independent and biographer of Yeats, Arnold thought MacGreevy exaggerated Yeats sense of nationalism. MacGreevy was himself a nationalist and looked to Yeats' paintings to capture those feelings. According to Arnold, Yeats was a republican but he was not inspired by the political events taking place around him.

MacGreevy introduced Samuel Beckett to Yeats. At the time, Beckett was young and a relatively unknown writer in Dublin but he admired Jack's writing and paintings. In Jack Yeats: A Centenary Gathering, Beckett writes that MacGreevy overplays Yeats as a nationalist painter. Beckett argues for Yeats to be appreciated for his art on "aesthetic grounds" (Beckett 73).

Art critic and former Yeats Curator at the National Gallery of Ireland, Hilary Pyle has written a number of books and articles on Jack B. Yeats. Among the many titles by Pyle held at Falvey Library is The Different Worlds of Jack B. Yeats: His Cartoons and Illustrations, a catalogue of Yeats' drawings.

2. Map of Pirate Island by Jack B. Yeats in Marriott, E.  Jack B. Yeats: his pictorial and dramatic art. London: Elkin Matthews, 1911. 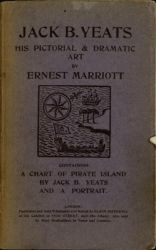 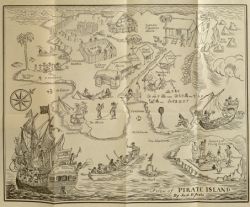 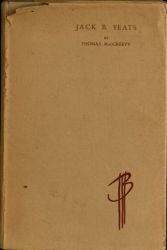 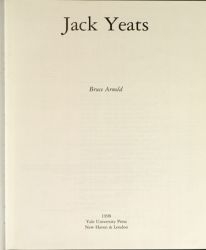 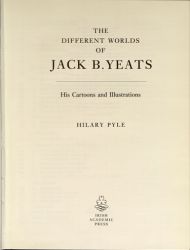