Ireland at the turn of the twentieth century was a turbulent place. Nationalistic movements were simultaneously occurring on intellectual, athletic, linguistic, and political fronts. While they had different vehicles the members of these movements sought to revive pride in Irishness by referring back to the Gaelic traditions.

One aspect of the Gaelic revival was the literary revival. Led by Jack’s brother William Butler Yeats (WB), the members of this movement wanted to improve the intellectual life of Ireland through literature. Its members included artists, writers, and playwrights such as Lady Gregory, George Russell (AE), Douglas Hyde, Standish O’Grady, John M. Synge, and James Stephens among others.

It is sometimes called the Anglo-Irish Literary Revival because the movement revitalized Irish literature through English and not the Irish language. Also, many of its leading members were members of the Anglo-Irish Protestant social class.

Similar to the other movements taking place, the writers used the old Irish heroes and legends such as Cúchulainn and Queen Maeve as themes in their work. The school of writing the movement generated was nicknamed The Celtic Twilight after a book published by WB.

While Jack was not as active in the literary movement as his brother, he collaborated with many members of the revival on various projects, including Douglas Hyde, AE (George Russell), and John M. Synge to name a few. Visit A Broadside to see an example of how Jack Yeats' work fit into the revival.

The Abbey Theatre was born out of the literary revival movement. Founded as the Irish Literary Theatre, the theatre operated with very little funds until 1924 when the new government began subsidizing it. The Abbey’s mission was only to perform modern plays written by Irish authors or those that dealt with Irish topics.

This program is from the first production of plays under the Abbey Theatre name. It includes plays by the first directors of the theatre: Lady Gregory, WB Yeats, and John M. Synge.

The cover is indicative of the renewed interest in the old Irish legends. Maeve, Queen of Connacht is drawn with an Irish wolfhound. Artist Elinor Mary Monsell Darwin originally cut the design on wood. WB Yeats met the artist at Coole, Lady Gregory’s estate in Galway. WB later requested a design for Dun Emer Press for which Elinor drew Lady Emer standing by a tree (Visit Cuala Press to view the illustration).

Notable Works of The Period

The title of this book was used as another name for the literary movement taking place in Ireland at the time. WB and his contemporaries viewed the Irish peasant culture as a more real and authentic Irishness. It is a collection of their stories and beliefs about the supernatural and spirit world in Ireland. A popular theme in literary revival works, members of the movement often wrote about old legends and fairytales.

(The Religious Songs of Connacht)

Douglas Hyde (President of Ireland 1938-45) collected and translated this collection of poems and songs from the western province of Connacht. Hyde worked tirelessly to revive the Irish language. He was president of the Gaelic League, the organization founded to preserve Irish as a spoken language in Ireland.

The volume pictured from Villanova's Special Collections is unique in that it contains a letter written by Douglas Hyde inside the front cover. Dated from 1899, the address on the letterhead is Hyde's home in County Roscommon. The letter is addressed to a reviewer of Hyde's book and the actual review is glued inside the back cover.

The Love Songs of Connacht

Cuala Press printed this edition while it was still named Dun Emer Press. The book is typical of Cuala works in that it was printed in 14pt Caslon typeface, has a blue linen cover, and the publisher's information includes the number of copies printed. One of the poems, I Shall Not Die for Thee, also appears later in an issue of A Broadside. 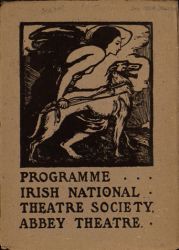 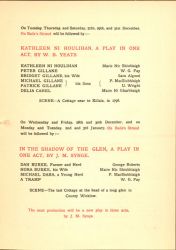 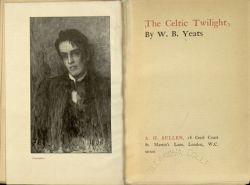 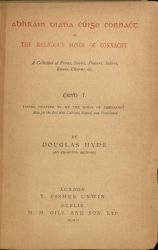 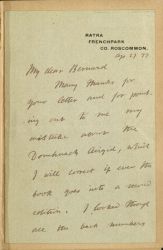 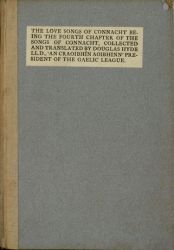