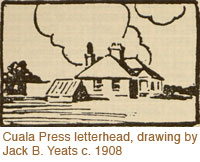 The Cuala Press began in 1903 as the Dun Emer Press. Evelyn Gleeson founded it as part of Dun Emer Industries. Gleeson named her home and company after Emer, the wife of the Irish hero Cuchulainn. Influenced by the Gaelic revival taking place in Ireland, Gleeson wanted to promote Ireland’s cultural heritage in the domestic arts. She trained women to work in a useful trade while at the same time preserving Irish cultural heritage. When the Yeats sisters took over Dun Emer they continued her work.

The Press was a source of tension between Lolly and WB. In letters to WB, John Butler Yeats encourages his son to be kinder to his sister. Jack tried to stay out of the family drama but was sometimes unsuccessful. According to Michael Yeats, WB’s son, Jack only "produced [illustrations] at his sister’s urgent requests" (Miller 1973, 7). Jack’s illustrations for A Broadside were one of the most successful aspects of Cuala. They were often reproduced with Jack’s permission in books, Christmas cards, and notecards. However, Jack "disliked them intensely, for he felt, not altogether without reason, that many people imagined that they were original paintings by him" (Miller 1973, 7).

Until the press closed in 1973, they produced and printed numerous Celtic-themed works and materials by well-known Irish authors including WB, Lady Gregory, Frank O’Connor, J. M. Synge, and Douglas Hyde.

This photograph was taken in 1903 while it was still Dun Emer Press. As the caption states, Elizabeth Corbet Yeats is working the hand press. They used an Albion hand press built in 1853 for printing all of Cuala materials. Beatrice Cassidy is rolling out ink and Esther Ryan is editing proofs. Barely visible on the back wall is a pastel mural by poet AE, also known as George Russell.

The Nuts of Knowledge, Lyrical Poems Old and New

This is one of the earliest books printed by Dun Emer Press and it was the first in which they used decoration. It contains a red line drawing by the author. Typical of works published at the press, a statement regarding the printing, number of copies, and the date was included on the last page. George Russell was a poet and artist who wrote under the pseudonym AE. He was part of Jack and WB’s literary circle and they occasionally worked together.

The red ink illustration on the cover of this exhibit booklet was designed by Elinor Mary Monsell Darwin. It is a woodcut of Lady Emer standing by a tree and the engraving was used on many works printed at Dun Emer, and later Cuala Press. WB met the artist while she was staying at Lady Gregory’s estate, Coole Park. WB asked Mrs. Darwin for a design for the Abbey Theatre (view the Abbey Theatre Program). Later he requested this design for his sister’s press.

WB and Jack worked together frequently for Cuala, as part of A Broadside and on other projects. Published several months after WB's death Jack drew the cover for this pamphlet written by his brother. Jack Yeats drew a "mad ship’s carpenter named McCoy", a character the brothers regularly saw on the Sligo quays as children. The carpenter would "make speeches from the top of an old boiler, denouncing his neighbors" (Pyle 1994, 203).
On the back cover is an advertisement for Cuala's publications. Elizabeth Yeats (Lolly) died the year after this was published and Mrs. WB Yeats took over the printing along with F. R. Higgins who edited the second series of A Broadside.

A Little Book of Drawings: Gathered from "A Broadside"

The Cuala Press printed this book to honor what would have been Jack Yeats 100th birthday. As the title states it is a collection of Yeats' more popular illustrations from A Broadside. The cover and frontispiece have the pirate with a mandolin illustration in color that Jack made for A Broadside. This book is one of only two hundred copies published that were hand-colored and bound in cloth. 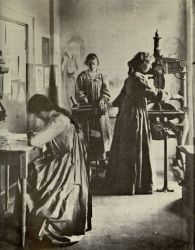 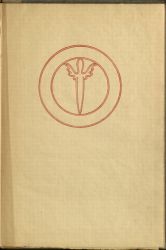 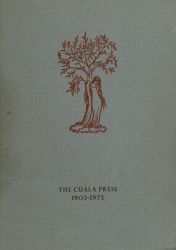 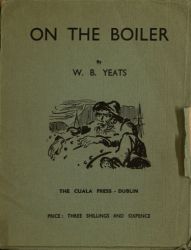 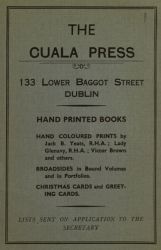 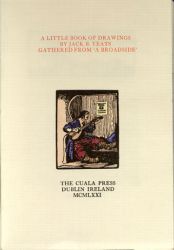